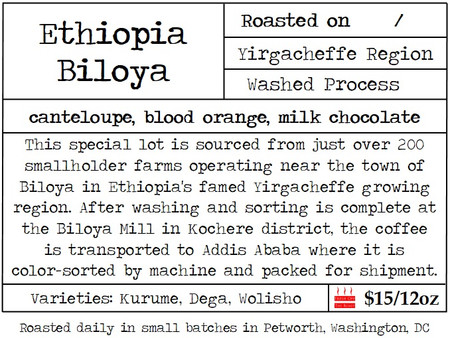 Coffee grown in the many districts and kebeles of the Gedeo Zone is often referred to as Heirloom varieties, many of which were propagated and distributed to farmers in the last 40 years. Trees grow in red brown fertile soil under the shade of many tree species including Bibira, Cordia Africana, and the subsistence crop Ensete ventricosum.

In the southern region of Ethiopia, farmers pick coffee selectively, harvesting only ripe cherries individually by hand. Pickers rotate among the trees every eight to ten days, choosing only the cherries which are at peak ripeness.

Many pickers average approximately 100 to 200 pounds of coffee cherries a day, which will produce 20 to 40 pounds of coffee beans. Each worker’s daily haul is carefully weighed, and each picker is paid on the merit of his or her work. The day’s harvest is then transported to the processing plant.

The Biloya washing station is named for the town, called a kebele, of Kore Biloya where it is located, in the Kochere district of the greater Yirgacheffe coffee area within the Gedeo Zone. Coffees brought to the Biloya washing station are grown between 1700-2000 meters above sea level by the 211 smallholders delivering cherry to Biloya who grow coffee on farms roughly 0.5-2.0 hectares in size. Built in 2001, Biloya processes nearly one million kg of coffee cherries per year. The washing station’s 138 raised drying beds cover the 2.5 hectares of land at 1700 masl. Biloya employs both men and women to process both Washed and Natural Coffee. --Info courtesy of Ally Coffee