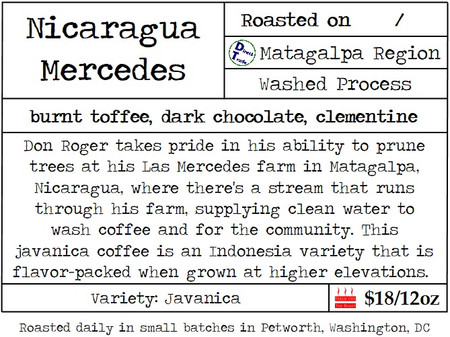 Don Roger takes pride in his ability to prune trees with special techniques at his Las Mercedes farm in Matagalpa, Nicaragua, training his bourbon to grow in even form next to his plot of caturra. His Mairena bourbon and caturra varieties are mixed 50/50 for a delightful cup and he's recently planted a grove of pache seeds from Guatemala which he thinks are a cross between caturra and another pache variety. There's a stream that runs through the farm which allows for clean spring water to wash coffee and for sharing with the community. Las Mercedes also has a special system of PVC tubing with tiny perforations underneath the groves of trees so that runoff from washing coffee is filtered by the earth instead of polluting streams. The coffee we have this year from Don Roger is his javanica, a rare variety adapted from Indonesia that makes for a flavor-packed cup when grown at the high elevation of his farm.