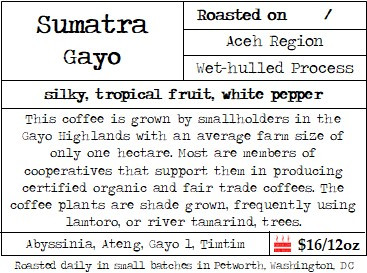 This wet-hulled coffee is grown by smallholders with an average of 1 hectare. Most farmers are members of cooperatives that support them in producing Organic and Fairtrade Organic (FTO) coffees. Gayo Highlands are named for the predominate ethnic group, the Gayo. In addition to Gayo, Acehnese, Javanese and Batak people also live in the highlands.

Coffee is shade grown, frequently using lamtoro, or river tamarind, trees. Producers in Gayo Highlands are known for their unique pruning method. They cut trunk at about 1 to 1.5 meters. Due to this, pruned coffee trees tend to grow outwards more than upwards, leading to a unique umbrella shaped tree.

Almost all farms in Gayo Highlands are small. On average, farms are about 1 hectare. In addition to growing coffee as a cash crop, many smallholder farmers also work at hired laborers at the nearby tea plantations. Tea is also a huge crop in the area. The bigger tea plantations are often near coffee farms. When the harvest is finished, coffee farmers will go there and pick leaves under contracted labor.

There are more and more initiatives by farmers on Sumatra to organize themselves into cooperatives. In the past, farmers did not have much leverage to help themselves get better prices for their cherry or parchment. When they’re in cooperatives, they can share resources, organize training and negotiate better prices.

Coffee from Sumatra is known for one very specific feature: the wet-hulled process or gilling basah. This process is only used in Indonesia. This is mostly because the relative humidity in the air is too high to actually dry the beans enough before hulling them. After handpicking cherry, farmers process their cherry using the traditional wet hulling (giling basah) method. Following harvest, cherry is pulped at or near the farm, on small hand-cranked or motorized pulpers. Some farmers in Gayo sell their cherry to a local collector who either processed the cherry themselves or sells it to a processor or wet mill. The coffee is fermented for approximately 12 hours (in small tanks, buckets or bags) and washed with clean water the following morning. Parchment is sun-dried for between half a day and two days, depending on the weather, to allow for skin drying which eases the removal of parchment.

At this juncture the moisture content is between 30-40%. Farmers deliver their parchment to a collector. Collectors may either wet hull the parchment themselves or sell the parchment on to someone who will. These steps become an essential part of the process here because a wet hulling machine, though slightly different, requires a similar investment to a dry huller. Wet hullers are larger, require more power and run at a faster speed than a traditional dry huller. Few, if any, individual farmers have their own hullers.

After hulling, the coffee seed is whitish and pliable and is called labu. It is laid out to dry on tarps or patios, where it reduces in size and moisture decreases to 14-15%.  This stage the green coffee is known as asalan—unsorted and with defects.   Much of the internal commercial trade is for asalan.   Exporters, most of whom are based in Medan, will typically finish the drying down to 12-13%, sort and prepare for shipment.

Indonesia has a long coffee producing history, but recently their coffees have been overlooked by the specialty market. Thanks to our innovative and ever-expanding supply chain, we are proud to bring you high-quality coffees from many of Indonesia’s unique regions, accompanied by in-depth traceability information.

Indonesia is perhaps best known for its unique wet hulling process (giling basah). Though its exact origins are unclear, wet hulling most likely originated in Aceh during the late 1970s.

Wet hulling’s popularity can be attributed to producers’ need for prompt payments. It was also adopted specifically by many producers who lacked the drying infrastructure that was needed to shelter drying parchment from the high humidity and inconsistent rainfall typical in Sumatra. At higher elevations with constant humidity and unpredictable rainfall, drying can prove to be slow, risky and difficult.